Vote Against Van Taylor on March 1

Vote Against Van Taylor on March 1 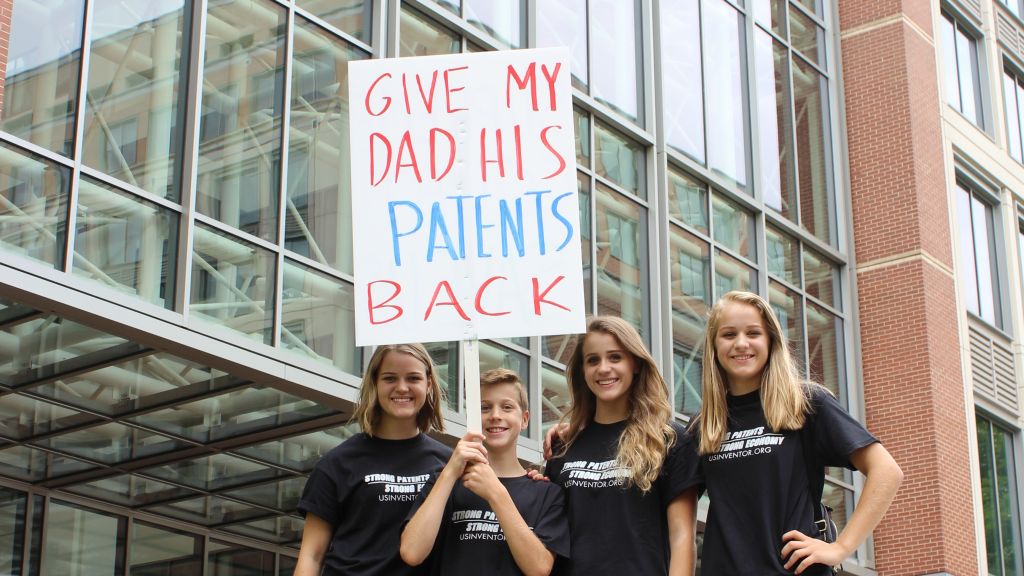 Friends and fellow citizens – please help us in our fight for inventors by VOTING AGAINST the incumbent Van Taylor in the Republican primary. Early voting is now through February 25th. Election day is March 1st. Take a Republican ballot (even if you vote Democrat in November). Vote for Keith Self, Jeremy D. Ivanovskis, Rickey Williams, OR Suzanne Harp (do not vote for more than one!). If you are not sure who to vote for – Keith Self is the proven conservative; Susanne Harp is the grassroots firebrand. Jeremy Ivanovskis is the dark horse. Rickey Williams is the dutiful citizen. We don’t care who you vote for as long as you vote AGAINST Van Taylor on or before March 1st.

Our objective is to keep Van Taylor under 50% and force him into a runoff. Please vote for anyone other than Van Taylor. We need an additional 2,000 people to vote against Van for this to succeed.

Please share this letter by Email, Facebook, Twitter, LinkedIn, or WhatsApp. If you are a member of an organization in Collin or Hunt County, please forward to the whole group.

Van Taylor Refused to Stand Up For Texas Entrepreneurs

Van Taylor told me “NO”. He said he will not co-sponsor legislation to stop big tech and China from stealing our intellectual property. He said he supports the patent invalidation tribunal run by lawyers for Google and Apple, as opposed to our Constitutional right to an independent judge and jury. I’m speaking of the division of the patent office established by the 2011 America Invents Act that unjustly revoked my patent, along with thousands of others.

My last meeting with Congressman Taylor was in October of 2021. That is when I finally pinned him down and he told me “no”. Our relationship began 3 years ago, his second week of office. I had flown to DC again trying to give inventors a voice in the U.S. Congress. At that time he explained to me that he had introduced a bill as Texas State Senator to impose penalties on inventors who send cease and desist letters to infringers. That was not a good start. I followed up a few months later with a lengthy call explaining our story and the problems created by the 2011 America Invents Act (you can guess by the title that it did great harm to inventors). He said he needed to study it more. In 2020 I ran into him outside the Capitol building and pressed him – he told me he had decided to “let it percolate”. I spent many hours working with his staff to help them understand the issue and proposed legislation. In our last meeting he tried to kick the can down the road yet again, telling me it would take a long time for him to study this and come up with a solution, and that it wasn’t his responsibility anyway. That’s when I called him on it, and he made it clear that he will not help. He said, “no”, he will not co-sponsor the bill to restore our rights so we can compete (the bill is H.R. 5874 Restoring America’s Leadership in Innovation Act).

Van Taylor has other plans. It became clear to me – since confirmed by others – that Van has decided to be a career politician. He has ambitions to become a Senator or even President one day. That means he cannot take any chances to upset the establishment or big tech. He will not take a strong stand or rock the boat or make any move that might jeopardize his ambitions. He believes he is entitled to the position, and that does not require him to be responsive to his constituents in Collin and Hunt Counties.

So I need your help. We have to vote Van Taylor out of office. Early voting is February 14th to 25th and election day is March 1st. Please share this letter with others and ask them vote against Van Taylor in the Republican primary (if you vote Democrat in November, it is entirely legal and appropriate to take a Republican ballot for just this primary). I am leaning toward Suzanne Harp, but you can vote for anyone other than Van Taylor. We have to keep him below 50% to force a runoff. I hope that this letter can result in 2,000 additional votes against Van Taylor, which will be just enough.

This is the tipping point for the effort I have been leading to restore patent rights, empower startups, and invigorate innovation for the United States. If my own Congressman is held accountable, others will take notice and we will begin to see real progress.

I quit my job at Texas Instruments in 2006 to become a full time inventor and entrepreneur. It was a huge investment and risk for our family. We had one shot to pursue this dream of making a living as an inventor. We gave up my salary as a process engineer, mortgaged our home, depleted our retirement fund, and deferred our children’s college funds. We knew that financial success was statistically unlikely, as most startups fail for a variety of reasons. But we trusted that if I invented a commercially viable solution to the problems at hand we would secure ownership of that invention by a U.S. patent. Sadly we were mistaken. We never dreamed that so-called judges inside the United States Patent Office would take away our patent the moment we needed to use it. 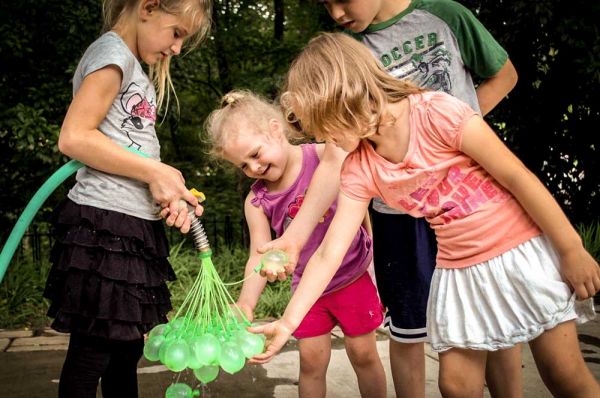 My invention Bunch O Balloons solved a 63 year-old problem of filling and sealing water balloons. I fastened 35 balloons to the ends of flexible tubes by tiny elastic rings, and joined the other ends of tubes to a garden hose connector. Water flows down each of the tubes to simultaneously fill the balloons, and when the balloons are detached the elastic ring clinches the neck of the balloon shut. You can make 100 water balloons in a minute.

When we launched my invention on Kickstarter, a notorious knock-off company called Telebrands surreptitiously purchased a first edition product, reverse engineered it, went into production at their Chinese factory, and flooded the market with copies. They sold millions of infringing copies on television, the internet, Walmart, Bed Bath & Beyond, Toys R Us, Walgreens, Kroger, and Home Depot.

Telebrands knew there was no way we could beat them in court. They had been in over 100 lawsuits over intellectual property, and in every case crushed their opponent with overwhelming expense and delays in the federal courts. Plus the 2011 America Invents Act gave them a new weapon – a patent invalidation tribunal designed and operated by big tech lawyers at the United States Patent and Trademark Office (USPTO).

Sure enough, the USPTO revoked my patent, giving Telebrands the legal right to copy my invention. We fought back. We raised and spent $100,000 every week for years to fight dozens of cases in Texas, New Jersey, the USTPO, and the federal court of appeals. When all of our work was unraveling, several other inventors joined us in a patent burning protest at the USPTO headquarters near DC. This act of desperation brought relief, as President Trump fired the Google lawyer who was running the USPTO. We won a critical appeal. We hired more lawyers. We saw many miracles and managed to escape dozens of tricks and traps deployed by dirty lawyers and callous bureaucrats.  After nearly five years, Telebrands ran out of options, reluctantly agreed to stop their misdeeds, and paid up.

We won, but only because we were blessed with more money and political influence than Telebrands. It had almost nothing to do with the value of my invention or the quality of my patents. This is no formula for success for startups facing billion and trillion dollar corporations who steal their technology.

Clearly, the U.S. patent system is broken. We cannot advance with a flourishing innovation ecosystem while inventions can be stolen at will by deep-pocketed corporations. We cannot succeed if the USPTO is consistently siding with IP thieves against inventors. I’ve met hundreds of inventors now who have lost most or all their life’s work due to injustice in the U.S. patent system. Investors are not funding long shot ventures where successful innovations can be reverse engineered. Big tech just keeps increasing their riches, power, and stranglehold on society. The USPTO keeps growing more lost and corrupt.

U.S. History provides a great lesson. From 1790 to 2011 the U.S. patent system was a meritocracy. Our founders broke from the English tradition that awarded patents as favors to the wealthy and influential. The word right is only mentioned once in the Constitution – the “exclusive right to authors and inventors”. In America, individuals were motivated and rewarded for participating in inventing. Centuries before gender pronouns were an issue, the 1790 law awarded patents to any “he, she, or they…invented or discovered any useful art, manufacture, engine, machine, or device”. Women and African Americans in the 19th century were able to participate, own intellectual property, and succeed. The benefit to society was abundant, as the United States developed from a fledgling colony to a world superpower within 3 generations.

As a result of my harrowing experience, I accepted a volunteer position as policy director for US Inventor, a national non-profit organization advocating for the rights of inventors. I have met hundreds of awe-inspiring inventors with thousands of patents on incredibly important discoveries. It is critical that we give inventors a chance to try and compete. We have to elect lawmakers who appreciate the important role of inventors who will give them a chance.

As a volunteer for US Inventor, I represent inventors in 50 states and 435 congressional districts. Yet my own Congressman Van Taylor refuses to take a stand. It is imperative that we remove Van Taylor from office so that inventors can have hope and a fair chance to succeed. 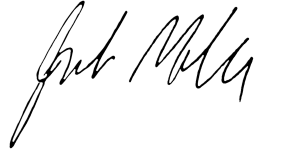